When I heard that Daniel Boulud, the famous New York Chef had opened his first overseas outpost in Beijing, I told myself I had to give it a try. I had seen Chef Daniel on TV many times, and always liked his genial and easygoing approach. He always comes across as friendly and generous, unlike some other big-name chef from across the Atlantic which is more famous for his expletives.
Expecting a table to be difficult to come by, I immediately tried to make a booking after landing in Beijing. I booked for a party of 15 persons on a Saturday night, and to my surprise, it was confirmed immediately. I was even told that they will give us the conservatory – a special room reserved for bigger groups.
As the day neared I was full of anticipation. This would be my first real experience in a 4-star restaurant. Maison Boulud is located in the Legation Quarters near Tiananmen Square. It was the American Legation (sort of like an embassy) during the Qing Dynasty. The venue is a collection of Classical buildings which had been beautifully restored, with a large open square in the middle. There are several restaurants and bars within the complex, and Maison Boulud is no doubt the jewel in the crown, occupying the most prominent building.

The entrance to the complex. 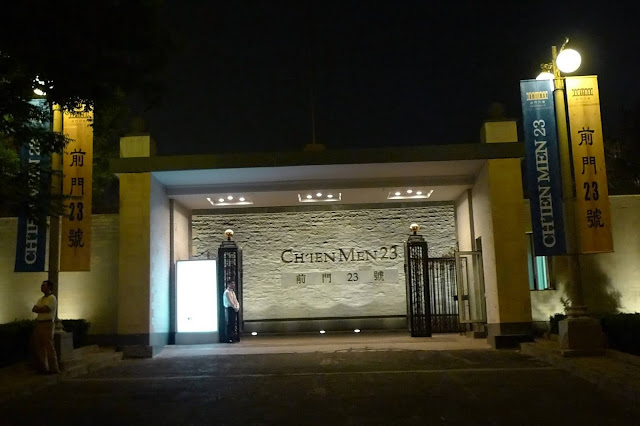 The Maison Boulud building at the centre of the square. 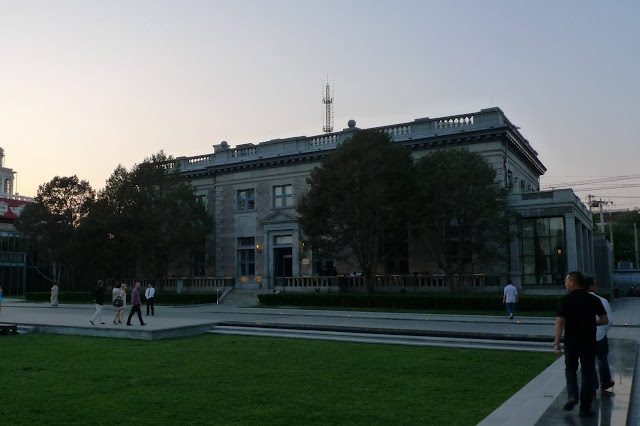 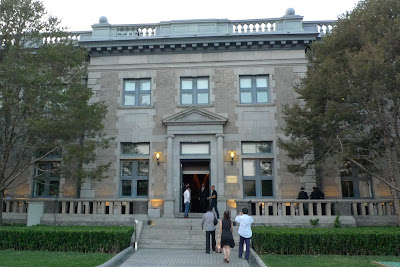 Upon arrival we were shown to the conservatory which is a glass-walled attachment to the existing building. It was a beautiful space, as was the rest of the restaurant which was very elegant, classy yet understated. The wait staff were all elegantly dressed in black, and service was efficient and discreet. We were shown our 4 course Prix Fixed Menu, and made our choices for the entree, soup, main course and dessert. 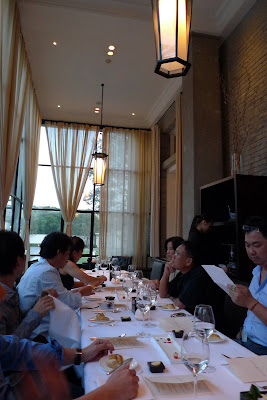 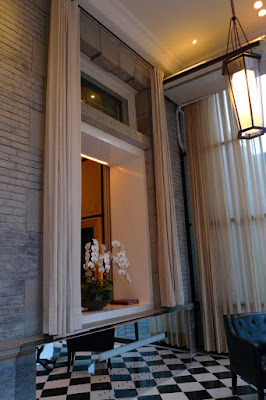 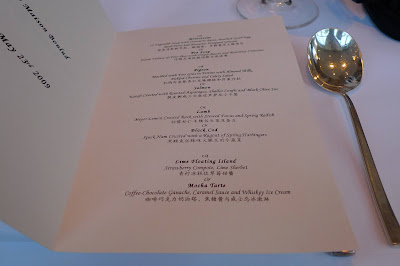 Dinner started with some bread and amuse-bouche. All were excellent - I could eat tons of the bread ! 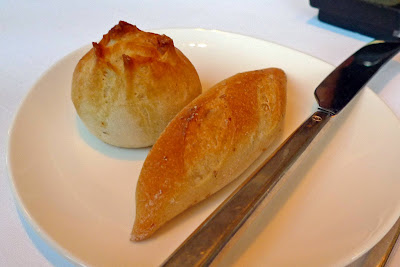 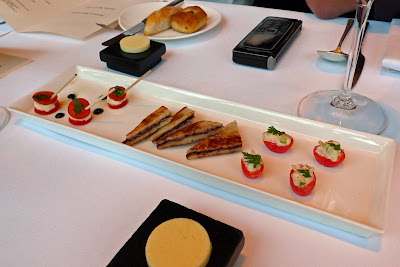 There were 2 choices for each course. I chose the 12 Vegetable Ministrone Soup - which had a quail egg, orreciette pasta and basil pesto inside. It was served with a proscuitto wrapped grissini. The vegetables were Spring-fresh, but I felt the overall taste was a bit too subtle, perhaps not enough seasoning. It didn't have the explosion of flavours that I was expecting. This was not a very good start. 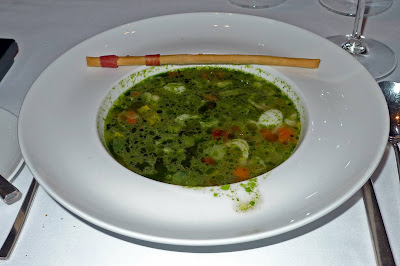 Some of my friends had the Pea Soup, and they liked it. 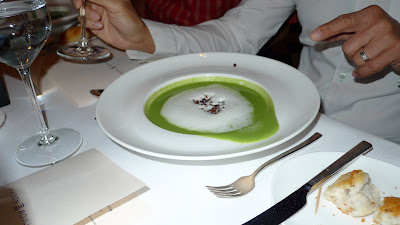 For entree I had the Pigeon Terrine with Foie Gras, served with Pickled Cherries and Celery Salad. The Terrine was great - gamey, rich and flavourful. I wished there was more. 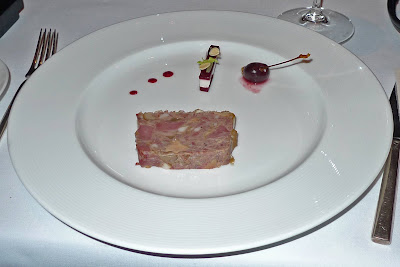 Some had the Katafi Crusted Salmon which they all loved. 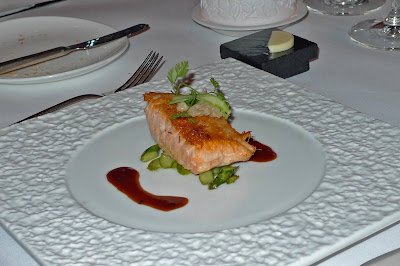 For the main course, I had the Speck Ham Crusted Black Cod, served with Ragout of Spring Harbingers. The black cod was perfectly cooked - the flavour was infused throughout the whole piece of fish, and every mouthful was pure delight. It was the most delicious dish of the night. 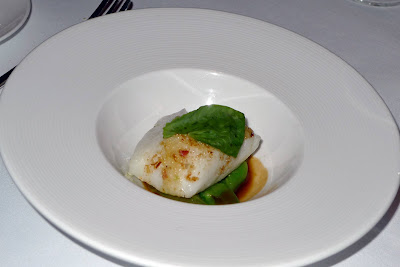 For dessert, I had to have the Mocha Chocolate Tarte, served with Whiskey Ice Cream. Just great ! 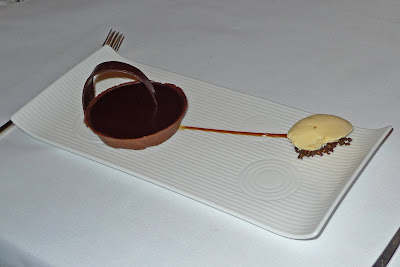 After the dessert, Petit Fours were served. Followed by the famous cotton candy which came in a huge glass jar and was cut and served at the side of the the table. No need to say, all were delicious ! 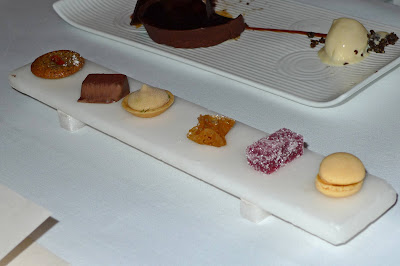 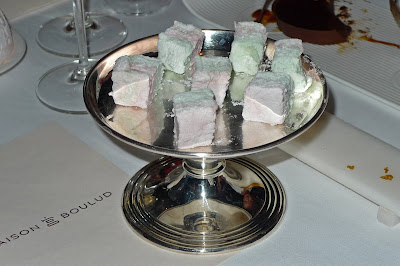 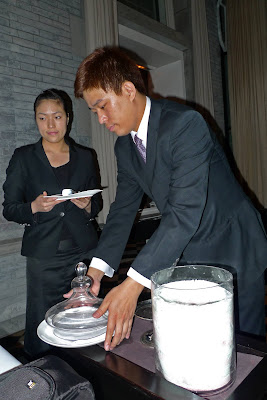 The service at Maison Boulud was impeccable, and the food was really good. However, it wasn't the sublime experience which I had expected of a 4 star restaurant. Perhaps Chef Daniel need to visit more often to perk up the menu. The Prix Fix dinner cost about RMB 430, and wine pairing is an additional RMB 250.00. Not expensive by international standards.