The Pork Chop Bun has been blogged about so much, and has acquired such a revered stature as THE THING to eat in Macau that I was almost afraid to try it. You know the problem when hype meets reality - it usually ends in disappointment. Anyway, despite my fears I was still determined to give it a go. We found this hole-in-the-wall outlet at Senado Square that specializes in 2 things - Pork Chop Buns and Egg Tarts. And they make the buns to order - not sitting there waiting for the fat to gum up. It was a 10 to 15 min wait, but better fresh then old and stale. 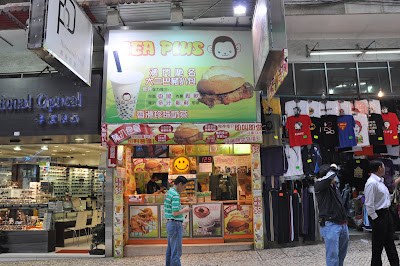 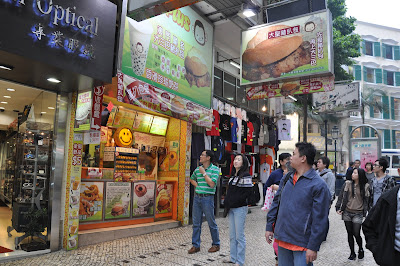 You order from this hole and wait for your number to come up, kind of like at a bank teller. 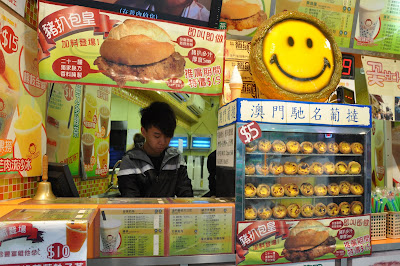 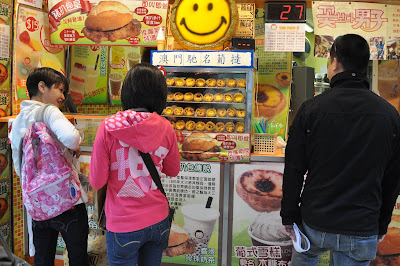 After the first bite I could see what all the hype was about. It was good ! A simple combination of a slightly crunchy bun with a deep-fried marinated pork chop, this is one of those things that can make an addict out of many foodies. The bun has a crispy crust but a fluffy centre. The pork chop was seasoned with salt, pepper, garlic and some secret spices - it was crispy, tender and tasty. 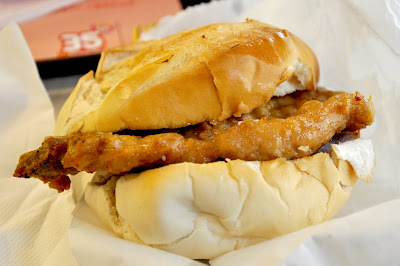 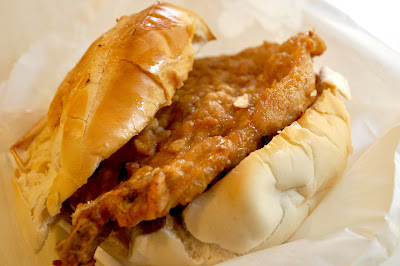 After my first Pork Chop Bun, I was constantly looking out for it. I have to tell you that they are not all created equal. You can't beat the ones that are made-to-order. Once the buns have rested for too long, the pork chop loses its crispiness, and the oil starts to gum up and become unpleasant. of course, the quality of pork used make a huge difference between tender and tasty or tough and inedible.
Email Post
Labels: food Macau Travel