Kafe Batan Waru is one of the new generation of cafes in Bali which provide nice food in a casual and attractive environment. The design is Modern Balinese - i.e. traditional Balinese architecture given a modern touch. The open dining area wraps around a drinks bar in the centre, and there is an extended area at the back for more privacy. The restaurant is not air-conditioned, but the cool Balinese evenings and ample natural ventilation did away with that necessity. Unlike Murni’s Warung and Three Monkeys Cafe which have great views and are best for lunch, Batan Waru doesn’t really have a view and it is best to go at dinner time when it is nice and cool. 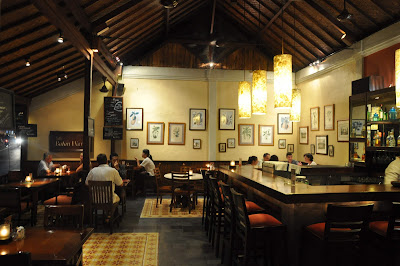 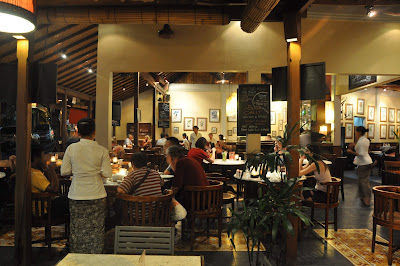 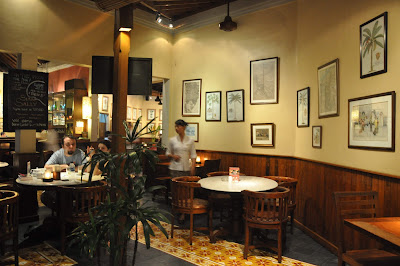 The menu is mainly Indonesian, and all of them look quite enticing. They also have some Western selections but I think it is best to avoid these except maybe for the desserts.

We finally settled on a Crispy Duck, Nasi C ampur and Gado Gado (Indonesian vegies salad). The Crispy Duck was very good - crispy on the outside and not too dry on the inside. There's lots of flavours from the spices. 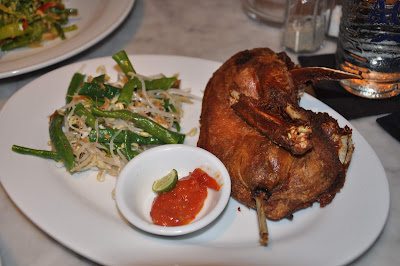 The Nasi Campur was nice but couldn't compare to Made's version. The Gado Gado was good - tasty peanut sauce, more like a paste then a dressing. 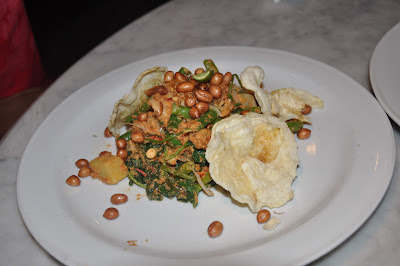 Kafe Batan Waru is part of a Balinese restaurant group BGF Restaurants which also runs Cinta Grill, Terazo Restaurant & Bar and Thai restaurant Siam Sally, all in Ubud. All the restaurants under the group are of good quality and worth a try.

Bali local guide said…
Babi Guling is Balinese most popular food which is easily found anywhere in Bali, Babi Guling Or ROAST SUCKLING PIG is a whole pig which is cooked with smoke (Similar with BBQ with lower fire). it needs long process to make the whole meat before serving. Babi Guling has tight meat (like beef)
BabiGuling Balinese food is the most popular, is a kind of side dishes made ​​from female or male piglets are intact except the entrails removed entirely replaced with herbs and vegetables such as cassava leaves, roasted on a bonfire while playing around (rolled) until cooked marked premises color skin become brown and crispy.
Pigs roll in the beginning used for ceremonial offerings in both traditional ceremonies and religious ceremonies, is now sold as a good meal in cafes, restaurants and even luxury hotels in Bali. Bolsters the most famous pig usually comes from Gianyar regency at IBU Oka's Warung.
July 21, 2011 at 12:44 AM